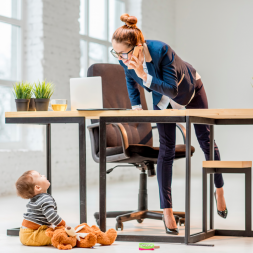 Is there a third role lurking in your life?

I was speaking at a conference when an attendee raised her hand and asked how I balance my work as a nurse practitioner with motherhood. The question took me a bit off guard as I do better in situations where I have time to contemplate rather than those on-the-spot kinds of moments.

So, I said something about outsourcing and division of household responsibilities that was probably not so insightful to the woman seeking advice. But, I do think I have struck that elusive work-life-motherhood balance (at least for the moment). As I contemplated the question in more depth, I deduced exactly how I landed in this current state.

If we haven’t had the chance to meet (I hope we do!), I am the mother to a 9-month-old son. I work as an emergency nurse practitioner and also here at ThriveAP. I love my profession and my passion is helping newer NPs along in their career journey. Balancing my highest priority, raising my son, with these workplace obligations and maintaining some semblance of a social life isn’t always easy. Recently, however, a friend talked me through an important realization.

Lurking in my home among my husband’s role as a father and mine as a mother is a silent third party – the role of household manager. Household management duties include things like calling the pest control guy after spotting an army of ants tromping through the kitchen. They are tasks like grocery shopping and meal prep and laundry. Societally, these household duties are commonly lumped in with the role of motherhood. But, doing the dishes and being a mother aren’t intrinsically related. Rather, being a mom is all about time and care of a child. It’s about experiences with your child and family. It’s about keeping your little ones safe and secure and letting your kids know they’re loved.

As a working mother it’s easy to feel like you’re failing your child. Time outside of work is spent on the house manager role rather than the mom role. So really, you feel not like a working mother but more like a woman with two jobs – that of a nurse practitioner and that of a household manager. Managing your children out of the corner of your eye while getting other jobs done is what for the most part your motherhood role is left with. Understandably, you feel like you’re failing. One of my most freeing realizations so far has been that work-life balance was eluding me because I was in reality attempting to perform well in three capacities- mother, household manager and nurse practitioner.

Recognizing the role of household manager helped me realize the root of and communicate about this problem. For me was the least important and desirable of my responsibilities. It’s one I can outsource. It’s one I can share with my husband. And, it’s not inherently linked with my success as a mother. So, I delegated more responsibilities at home to babysitters and our nanny as well as took advantage of some convenience services like ordering groceries online. I slowly rid myself of a number of these ‘house manager’ tasks. And, I decided there were a few things I could just let slide. The result? Time.

Babysitters do our laundry and dishes. Our nanny calls the pest control guy and drops off the dry-cleaning. I’m able to devote the time I would have spent on these tasks 100% to our son. When I’m at home, I’m present…most of the time, anyway. This gives me the balance I initially sought.

The realization that working moms (and dads, too) are really trying to tackle the additional, unseen and under appreciated role of household management has been a simple but important one for me in validating the struggle for work-motherhood balance and recognizing how to spend my time more effectively and intentionally.

How do you find balance as a nurse practitioner and mother?