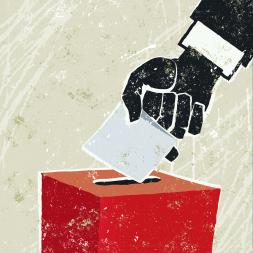 On the Ballot: Healthcare at the Polls 2016

Did you watch last night’s presidential debate? I missed most of the spectacle as I was working in the emergency department, but I was able to catch a few snippets here and there. Not only do we all have a civic duty to vote this upcoming November,as nurse practitioners, we have an added stake in the political game. Our careers are significantly affected by political decisions, directly or indirectly, so it’s important to know where candidates stand when it comes to healthcare. This election season, there’s the choice of president to consider, along with a few important state initiatives on the ballot. What do you as a nurse practitioner need to know as you cast your vote?

Healthcare is such a priority for Trump, that his website states he will repeal the ACA his first day in office. In place of the affordable care act, Trump promises to take steps toward implementing a free market healthcare system to broaden healthcare access, increase quality, and make services more affordable. The Trump team outlines a few steps the administration would take towards doing so, such as allowing tax deductions for health insurance premium payments, accommodating HSAs (Health Savings Accounts), and requiring price transparency in medicine.

Clinton pledges to defend the Affordable Care Act as president, as well as expand Medicaid and health coverage to families regardless of immigration status. Other Clinton health initiatives include reducing the cost of prescription drugs, and defending access to reproductive healthcare.

Whatever your political leanings and position on health policy, as a nurse practitioner it’s important to think through the implications of these measures both when it comes to your own career, and how these policies will impact the health of your patients. Will they prove effective for improving our broken healthcare delivery system? What might be the unintended consequences of each proposition?

Two states, California and Colorado, each have notable healthcare initiatives on the ballot in November. Should these initiatives pass, this could set the stage for other states to follow with similar legislation.

Citizens of Colorado are voting on a revolutionary statewide single payer health system. The proposed system, titled Amendment 69, would provide government funded healthcare to all citizens. Should the amendment pass, healthcare in the Rocky Mountain State would change drastically.

Proponents of the legislation argue that a single-payer system would expand access to care, and allow providers to treat all patients equally, as insurance status would not be a consideration in healthcare delivery. Opponents of the amendment contend that injecting more politics into the healthcare equation gives providers fewer options for treating their patients and would crush Colorado’s economy.

Advocates for Proposition 61 say that the measure would make prescription drugs more affordable for the state’s most vulnerable patients. Opponents, namely those in the pharmaceutical industry, argue that curbing costs would cut profit margins affecting company’s ability to fund drug development and research programs.

Whether you’re a nurse practitioner practicing in a state with a controversial healthcare initiative on the ballot, or you’re focused primarily on the presidential election, make yourself an informed voter this November.