The Anatomy of a Stethoscope

I’m in the market for a new stethoscope. Thinking about how many bare backs that thing has touched grosses me out. Don’t get me wrong- I frequently give it a rub down with at least 4 alcohol pads, but it’s gotten the the point where when I see my stethoscope all I can think of is hairy back moles, kids with croup, and diaphoretic MI patients. There are not enough alcohol pads in the world to wipe the memories from my mind of all the places my stethoscope has been. So, in the interest of educating myself, I’m doing some thorough research in my purchasing process.

I use my stethoscope everyday I work in the ER. And, frankly, I take it for granted. It’s not a particularly expensive device but clues me in to a lot clinically. From breath and bowel sounds to the lub-dub of a beating heart, I can tell a lot with the handy little device. But, ask me about the intricacies of how it works and what makes one better than the other? There, I’m actually a little lost. Today I want to take a quick look at the anatomy of a stethoscope.

How do stethoscopes work?

Stethoscopes are pretty simple devices. They work using vibrations caused by sound waves. When a stethoscope is placed on a patient, the sound waves created by a beating heart, for example, cause the surface of the diaphragm to vibrate. These sound waves are then channeled through the tube on its inside walls. Sound waves finally reach the eartips meeting the listener’s ear. Since these vibrations travel through a narrow tube rather than dissipating outward as they naturally would, they are amplified allowing the examiner to hear them more clearly. This funneling of sound waves is known as “multiple reflection”.

The bell of the stethoscope functions differently. It does not pick up vibrations caused directly by the opening and closing of valves in the heart like the diaphragm of the stethoscope. Rather, it detects vibrations caused by the skin’s movement. Lower-pitched sounds occuring within the body casue the skin around them to vibrate. When the metal rim of the bell is placed against the patient, it picks up these lower frequency sounds that are usually missed when listening with the diaphragm. The bell is useful for detecting bruits, heart murmurs, and some bowel sounds. 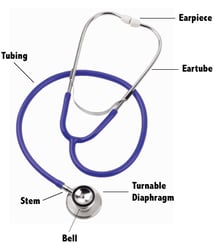 Stay tuned to the blog this week for more on how to make a decision when purchasing your next stethoscope as well as a list of affordable stethoscopes for nurse practitioners.

Interesting fact: The stethoscope was invented by astute French physician Rene Laennec. Legend says he invented the device to avoid placing his head on the bodies of unwashed, foul-smelling patients. Dr. Laennec- we thank you!