An Inside Look Into Life as an Army Nurse 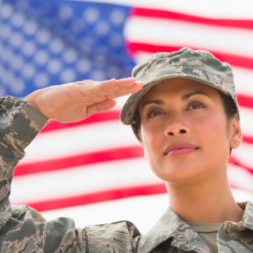 Have you ever wanted to take your career to the limit? Or, at least try something totally new? As a nurse practitioner, I’ve heard of nurses working in the military or NPs stationed overseas through the U.S. Department of State but I’ve never gotten an up close look into these types of unique career experiences. Until today.

Captain Lisa Dukes is a nurse working with the Army Nurse Corps. Today, I chatted with Lisa about her life as an army nurse. She graciously answered my most pressing questions and shared her experiences and thoughts on working as a nurse in the military. Here’s what she had to say.

Tell me about how you decided to become an army nurse.

When I was a kid my parents worked for the government. My stepfather was an army reservist so I grew up around the military. I didn’t become a nurse until later in life, at age 36, when I began working as a civilian nurse in the ER. After I had been a nurse for about three years, I was finishing up my BSN degree and decided to take a look at what options were out there. I wanted to do something a little different so I joined the military.

One thing many people don’t know is that you don’t just sign up to join the army as a nurse. It’s a long and competitive process to enlist. The military is currently cutting back on missions, operations, and personnel so they are selecting fewer and fewer nurses. The whole process took me ten months.

Working in a military hospital isn’t always so different. In some ways, the ER, is the ER, is the ER. The army has two major types of hospitals- major medical centers like you find in San Antonio, Texas and Ft. Lewis, Washington, and smaller medical centers that function more like community hospitals. I work at the smaller end of the spectrum. Our emergency department has about 11 main beds plus a 4-bed fast track. While we are small, we see about 100 patients a day.

To be treated in our hospital, you have to be eligible for care in a military facility. Most often this means I treat individuals on active duty, reservists, and military retirees. Occasionally, I do treat non-military patients such as contractors who may get injured or have a health event while working on post.

What was the training like to become an army nurse? Did you have to go to boot camp?

Medical personnel in the army take a basic officer leader course, which is essentially our version of boot camp. But, no one is yelling in our face or forcing us to do push-ups (although I guess they could). The course is 11 weeks long. The first two weeks are introductory, essentially death by powerpoint! We also get three weeks of field training where we sleep in a tent, carry a weapon, and do simulated convoy exercises. It’s nothing like what enlisted soldiers go through- it’s a much lighter version. The army recognizes that nurses are already professionals. For the most part this training course is the easiest time I have spent in the military.

You were deployed to Afghanistan. How were you selected for that mission? How did you feel about deploying?

Everyone in the army is given a designator, for example mine is “66H”. This helps everyone else know your job. When I came in, I had some ER nursing experience so my designator was such that I was put in a pool that allowed me to be picked for certain assignments including potential deployment.

When the army deploys medical support for troops, sometimes they don’t have everyone they need so they pull from other places. This is called the “professional filler system”. Through this system I was assigned to work with a forward surgical team (a small, mobile surgical unit) from Colorado.

Being selected for deployment was one of those things that was exciting and scary at the same time. I had to pack my entire life into four duffel bags and say goodbye to my loved ones, including my husband, for nine months.

Sometimes when nurses deploy, they are stationed in a large hospital which is similar to being in the United States just with more trauma cases. This was not my experience. I was stationed in a remote area on a small compound housing just 60 people. Our entire compound was about the size of a Walmart parking lot. While there were drawbacks to the size of the base, I got tired of seeing the same faces everyday, the small size allowed for a less restrictive environment and more freedoms. Some days I was even allowed to wear civilian clothes which was a big deal!

I was deployed to a very remote area in Afghanistan. The environment was harsh. We lived at a 6,500 foot elevation with dry heat in the summer and cold, icy winters. It was very dirty! No matter how much we cleaned, the next day everything was covered by a fine layer of dirt all over again. Supplies for the compound, such as our food, were delivered by helicopter or air drop. Sometimes the ‘chutes on our food supply wouldn’t open and it would explode on impact!

My team essentially worked out of a small plywood hospital. We were the first line of treatment for soldiers severely injured in combat. We had a small ER, OR, and ICU typically staffing three nurses per section. We also had a few CRNA’s, general surgeons, army medics, and other support staff. All in all, our medical unit had about 22 people.

I was in charge of the emergency department which was essentially a two-bed trauma station. Patients would come in, be triaged by the general surgeon, and either go directly to surgery or stay in the ER for an immediate intervention such as a chest tube if necessary.

Returning home from deployment was overwhelming. There were so many choices, for example at the grocery store or restaurants. And, I was jumpy with loud noises.

What are the biggest challenges of working in the Army Nurse Corps?

Giving up personal freedoms. I am not allowed to travel more than 250 miles from my station in Georgia without written permission from multiple people. There is a lot of bureaucracy and paperwork in the military adding an extra layer on top of the challenges one would normally face working as an emergency nurse.

Also, our hospital uses both army and civilian nurses. Civilian providers seem to get preference which is frustrating. For example, civilian nurses make their own schedules so the army nurses are placed in left over shifts. If a civilian calls out from work, an army nurse has to go in to cover the shift unless they have a special pass for leave. So, technically I could be called in at any time. As you move up the food chain, you get more leniency but the freedom this offers is replaced by the bureaucracy of holding a higher position.

Would you do it all over again?

I don’t regret joining the army (although I am looking forward to returning to the civilian workforce). It has been an interesting experience and I would do it all over again.

My only complaint about the Army Nurse Corps is that if you come in as a brand new nurse, by the time you hit the three year mark the army begins to want you to emphasize leadership over bedside nursing. You are put in a position of authority, but still have relatively little clinical experience. You are still getting your bedside skills in check. I believe they are taking nurses away from patient care too early- people need time to become competent nurses. I was glad I entered the army with some prior nursing experience.

Do you recommend joining the Army Nurse Corps to other nurses?

I definitely recommend the army to new and recent grads. The job market for nurses all around right now is tight so joining the military can be a good way to get experience. Currently, the army requires that nurses enter with two years of experience but the air force and navy do accept new graduates. Just be aware, like I mentioned before, the process of commissioning can take months!

A big Thank You to Lisa for giving us the inside scoop on life as an army nurse.